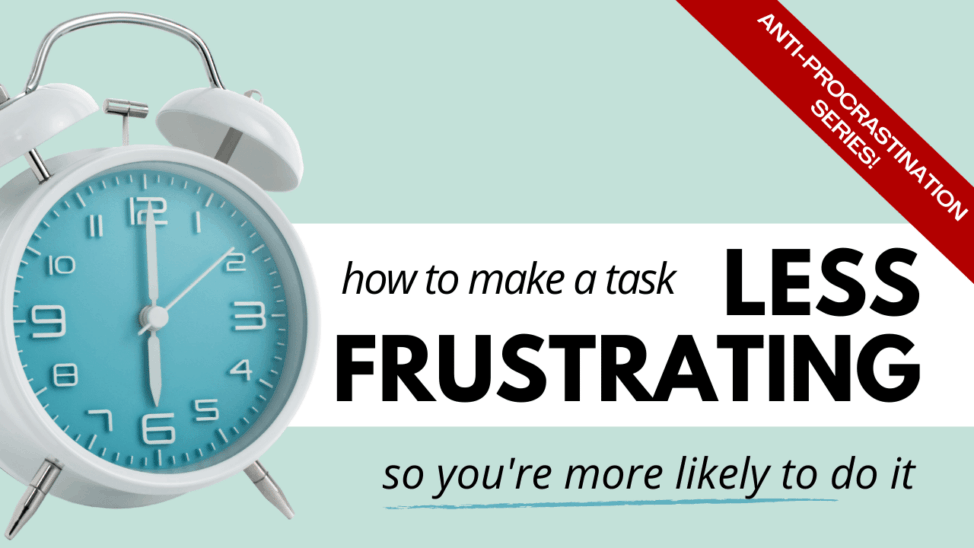 This post is part of my anti-procrastination series. For other posts and resources in the series, check out the links I include throughout this post.

I begin every post in the series with a list of the 6 common reasons why most people procrastinate. Tim Pychyl identified that we procrastinate on a task when it is one of the following:

This blog post offers strategies for overcoming the second procrastination trigger on the list: when a task is frustrating.

2. Break the task into the smallest steps possible.

You’re going to see this strategy throughout the entire anti-procrastinate series because it works. When a task is frustrating, we tend to see it as bigger and more difficult than it really is. We see it as insurmountable. But breaking a task down into teeny tiny pieces enables us to see it as doable.

I suggest doing this strategy on paper. Write the full task at the top (yes, do this, even if the task is basic like “do the laundry” or “take notes on chapter 5.”)

Underneath that, write a numbered list of each micro step you could take towards the larger task. For our “take notes on chapter 5” example, you could write:

Here’s an in-depth tutorial on this particular strategy.

Now that you’ve made your list of baby steps, take just the first step. Do this before you put your list away. In the case of our example, you would collect all your materials and put them in one spot. Boom. Even if you don’t immediately take any more steps after the first one, at least you can now say you’ve started.

When we chronically procrastinate due to intense feelings of frustration, we likely have a low frustration tolerance, or a high discomfort sensitivity. Each of us has a different tolerance for frustration and discomfort, and that’s why some people have no problem diving into tasks that others run from.

Think about your frustration tolerance. Is it low across multiple contexts? Do you frequently dodge tasks – no matter what they are – if they make you the slightest bit uncomfortable? If so, then you likely have a low frustration tolerance. Understanding that this is a thing can be helpful, as knowledge is potential power. Now that you’ve identified what might be happening, you can work to change it. You can build your frustration tolerance gradually by working through smaller and less frustrating tasks, identifying what you feel as you feel it, and then accepting that discomfort is a normal symptom of progress.

More in this Anti-Procrastination Series

If you’ve been avoiding a task because it’s boring, then start with this resource here.