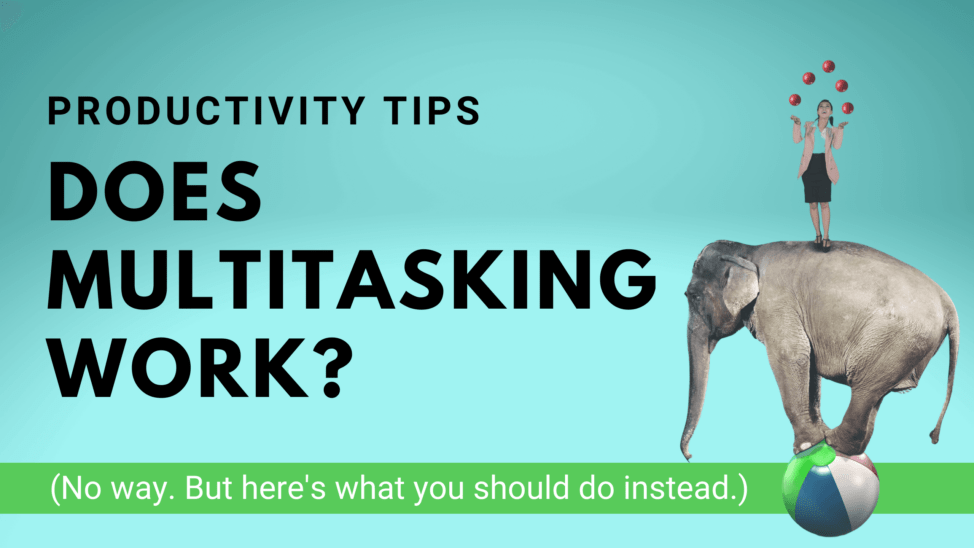 So the big question …does multitasking work? Is it a legitimate productivity tool?

The answer: Heck no. Multitasking does NOT work. Neurologically, it’s been proven impossible to effectively engage in two cognitively demanding activities at the same time.

Sure, some people can walk and chew gum, but chewing gum isn’t cognitively demanding.

Why multitasking does not work

If you’re skeptical about what I’m saying, and if you swear you can actively listen to someone talk (like a teacher or someone on a podcast, for example) at the same time that you’re trying to write or read something, let me explain what is really happening…

…You are NOT actually multitasking. You’re not multitasking because as I said, this is impossible to do when the two tasks both require significant brain energy. Instead, you are actually quickly switching back and forth between tasks — like a ping pong ball.

Why is this bad? Because according to research, every time we leave a task and come back to it, we lose time in the transition. In fact, we can lose up to 40% of our time switching between tasks — even if the switching happens quickly.

Other research indicates that when we quickly switch from one task to another one – for example, quickly checking our email while writing an essay – it takes 23 minutes and 15 seconds to fully resume focus on the first task! This is nuts.

Therefore, one of the best productivity hacks for students to start using, or stop using, rather, is multitasking.

(When you’re done here, check out these 24 productivity tips for students. I’ll bet there are a few hacks in the list that you could start using right now that would make a difference.)

What should students do instead of multitasking?

Simple. Complete one task at a time. This could play out two different ways:

If you’re a student, this means it’s best to complete one assignment at a time, in a focused state, without other things going on in the background.

Same is true if you’re completing projects at your job: focus just on one task until it’s done, and then move on to the next one. Resist the temptation to pop around.

So this means no conversations happening around you, no social media checks, no texting. (Oh so harsh.) In the end, when you fully commit to doing ONE thing at a time, you’ll end up spending less time overall on your assignment. And that’s the entire point of a productivity hack — right?

If you’re wondering which homework you should do first (the easy stuff or the hard stuff), here’s the answer.

One of the best productivity hacks I personally use is this.